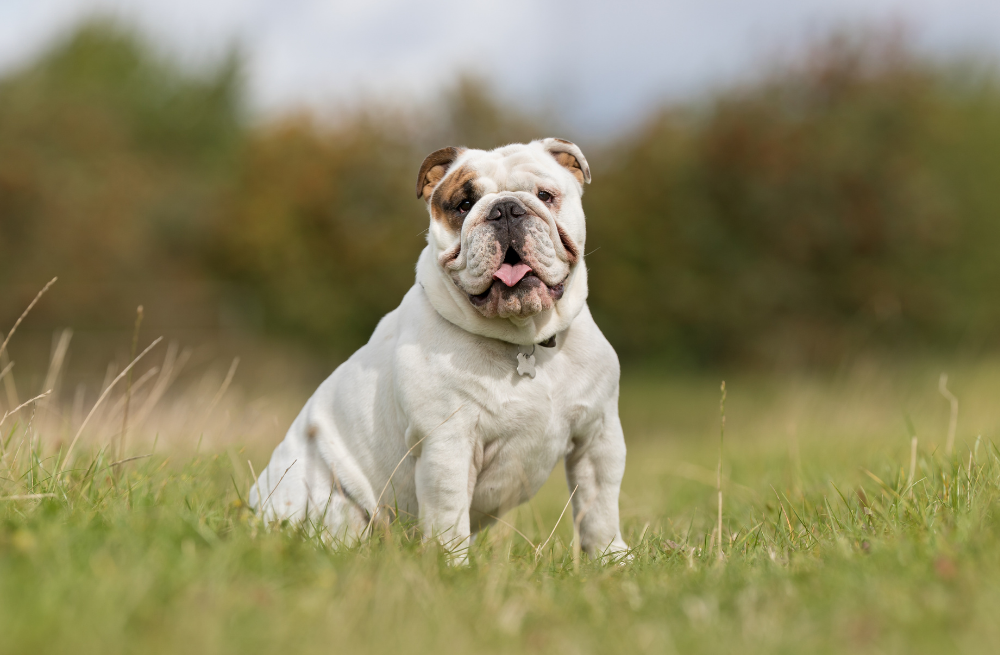 Capone is an English Bulldog puppy who came from a breeder out of state. He arrived in VA and he was very sick with bilateral otitis (infections in both ears) and pneumonia. Capone was treated for seven weeks with antibiotics.

Capone then began vomiting frequently. His owners initially thought the vomiting was related to his medications. When the vomiting continued, Capone’s family brought him to a primary veterinarian for a second opinion. His vomiting would frequently be accompanied by syncopal episodes. Syncopal episodes (fainting or passing out) are typically triggered by a sudden, temporary drop in blood flow to the brain, which leads to a loss of consciousness and muscle control.

Capone was diagnosed with Brachycephalic Obstructive Airway Syndrome (BOAS) – a pathological condition affecting short-nosed dogs and cats which can lead to severe respiratory distress. Some mild symptoms of BOAS may include noisy breathing (which can intensify with exercise), snorting, and snoring. More severe symptoms include distress due to difficulty breathing, tiring easily with exercise, and fainting. Some dogs may experience gastrointestinal (GI) symptoms, and could experience retching, vomiting, or inappetence (lack of appetite).

Brachycephalic Obstructive Airway Syndrome is caused by certain primary abnormalities that may cause an increase in negative pressure within the upper airways – without treatment, this pressure can eventually lead to secondary abnormalities.

To address his BOAS diagnosis, Capone was referred to VVC for surgery. Capone had surgery to address the abnormalities attributing to BOAS: nares (nostrils) resection, staphylectomy (soft palate resection), and resection of everted laryngeal saccules. He also underwent a gastrostomy for removal of a gastric foreign body causing outflow obstruction from the stomach, unilateral cryptorchid (testicle that is in the abdomen) neuter, and repair of an umbilical hernia.

Since his surgeries, Capone has experienced no further breathing or coughing issues.

After his surgeries, Capone had occasional vomiting until one day in early June when he vomited five times and collapsed after vomiting the final time. Capone has a history of GI issues, so his owners have tried changing up his diet per recommendations from their primary veterinarian. As a growing puppy, he was typically always hungry but since surgery, he had hardly had any interest in drinking water. Capone was being fed seven times a day to reduce the volume of food he was getting during each meal to decrease the frequency of vomiting. His owners increased the quantity of food he was getting with each meal, but he subsequently vomited five times as a result and continued to show little interest in water. To help understand and manage his symptoms, Capone’s family expressed interest in an internal medicine consultation.

Capone presented to VVC Fredericksburg’s Internal Medicine service for his chronic vomiting/regurgitation. He had a consultation and exam with our board-certified internal medicine specialist, Dr. Emily Austin. Initially, Capone was regurgitating with occasional vomiting. Note: Vomiting is an active process with retching and ejection of contents of the stomach and upper intestine; regurgitation is a passive process with no warning and is often ejection of contents of the esophagus.

If Capone were to eat too much, too quickly, he would regurgitate immediately. After surgery, he had been primarily vomiting bile or foam, very rarely food, and he appeared to do better if he was fed small, frequent meals. Previously his last nighttime meal was at 6 PM, then his owners added a 9 PM meal, and finally an additional 1 AM meal. This feeding schedule helped decrease the frequency of vomiting and regurgitation, however, he continued to vomit and regurgitate.

When Capone was fed three normal meals, he would regurgitate large amounts of food. There were some improvements after Capone was prescribed omeprazole. Omeprazole is a medicine that veterinarians can prescribe to treat stomach and intestinal ulcers in dogs, as well as acid reflux. However, there was no improvement with anti-nausea medication (Cerenia) in the past.

Capone also experienced several syncopal episodes (fainting/passing out) when he vomited or regurgitated. His owners figured out the puppy food he was eating seemed to be contributing to his vomiting. Capone was not given extra treats out of caution, and everything in his life was carefully regimented and scheduled.

At the time of his initial presentation to VVC’s Internal Medicine service, Capone was vomiting or regurgitating every 4-6 days. Capone’s family brought him to VVC’s Emergency service because he vomited five times (much more often than usual), then had a syncopal episode.

From the time he arrived in VA to meet his family, Capone has never been a “normal” puppy. His activity level is normal, and he has a voracious appetite. His diet consisted of chicken and mashed potatoes. He was fed seven meals per day, each meal contains 100 calories, and Capone’s last meal of the day is at 1 AM.

On initial presentation to our Internal Medicine service, Capone had a thin body condition but otherwise seemed to be an energetic dog. His baseline bloodwork, ultrasound, thoracic/abdominal radiographs, and ACTH stimulation test (a test to look for insufficient steroid hormone) did not provide an answer. Capone’s GI panel showed low vitamin B12. Upper GI endoscopy was discussed at that time, however, Capone’s family wanted to try medical therapy.

Capone was treated medically with ondansetron, pantoprazole, erythromycin, and metoclopramide. He also started vitamin B12 injections and was changed to Royal Canin Gastrointestinal Puppy food. Over time, Capone improved clinically and started gaining weight. His medications were slowly removed one at a time, his feedings were decreased, and the volume of food per feeding was increased.

Our ultimate goal for Capone was to improve his health and his quality of life. In tandem, we hoped to improve his family’s experiences, as they were waking up in the middle of the night for frequent, small feedings and they lived in fear of his syncopal episodes and Capone’s condition worsening.

Capone has not had further vomiting episodes (other than a piece of a toy – not uncommon for a young, curious puppy). His initial weight when he presented to our Internal Medicine service was 26.8 pounds. His current weight at his last re-check earlier this month was 42 pounds. Capone appears to be a healthy young dog at this time, and his family is thrilled with his response to therapy. 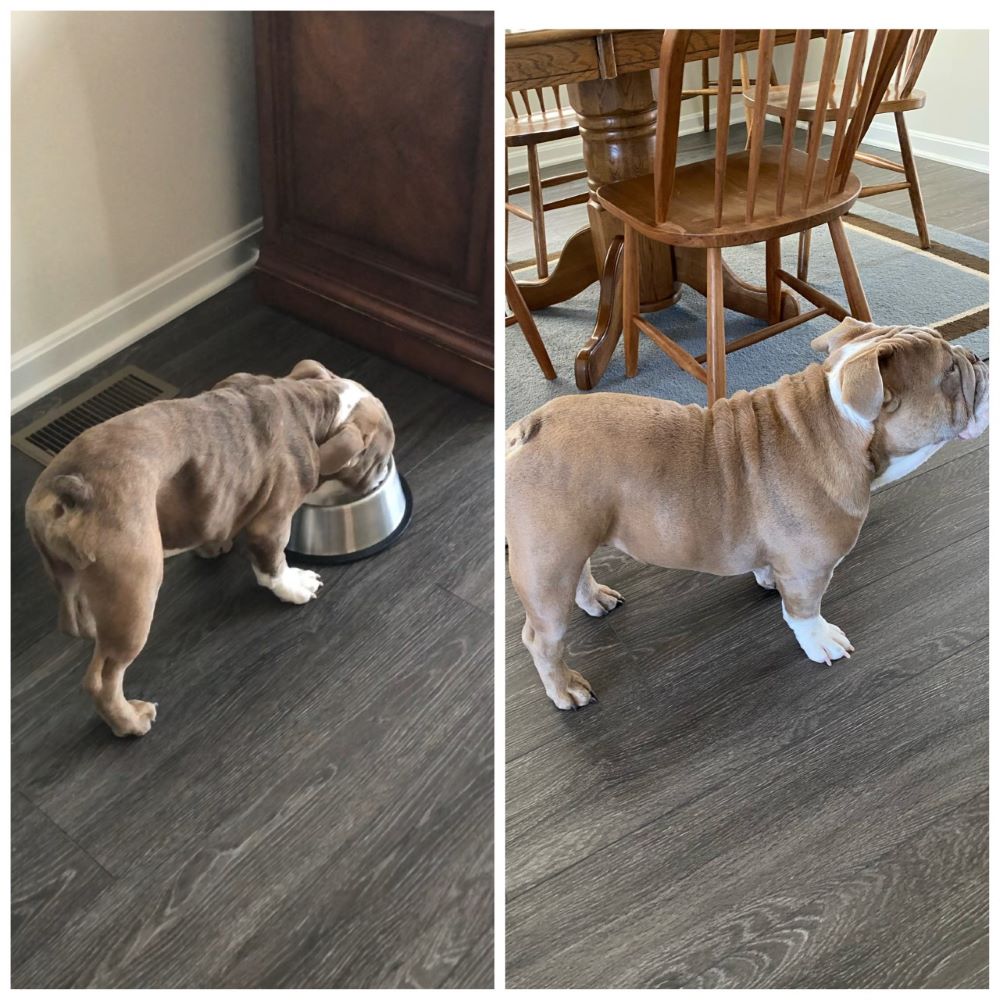 Before and after images that show Capone prior to his visits at VVC and after, at a healthy weight.